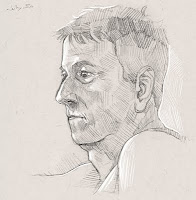 Today's figure drawing. This was my second time to see this model. He does very static, symmetrical poses which is pretty interesting, but hard to draw correctly. I ended up doing more portraits than usual. His face was very hard to capture also.
Posted by Kazu Tabu at 8:50 AM No comments: 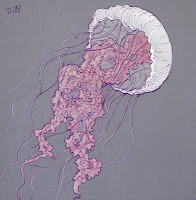 別に仕事は大して忙しくはないのだけど、妙に最近気持ちがガサガサする。パサついている。潤いが必要だ。バシっと夏を楽しんで、バシッといいものを創って、こう気持ちをパリッとしたい。効果音だらけでわかりにくいだろうけどね。
Posted by Kazu Tabu at 3:46 PM No comments: 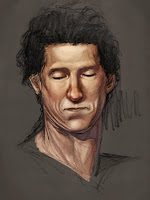 Digital painting study from last week's figure drawing. I usually like my painting while I'm painting, and start not liking so much after posting, and eventually hate it after a few days. But this time, I'm still liking this one. will see how it looks like after a few days.

By the way, I installed OS X Lion and I really don't like lots of new interfaces. Especially Mission Control. If you like Spaces and Expose of Snow Leopard, I strongly recommend not to upgrade. It's sad to say it, but Apple did really bad job about the user experience, which, I thought, they were pretty good at.
Posted by Kazu Tabu at 5:21 AM No comments: 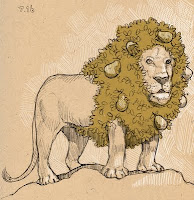 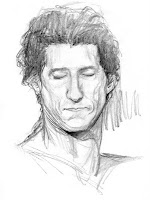 Today's figure drawing. The model was good, and he had lots of great poses although I couldn't capture much of it and all I can post is this portrait of him.

Tonight is Yu's art show: Create:Fixate. Stop:Pause:Now
The traffic doesn't look bad at all for now. Everyone got too scared by Carmageddon, it seems.
This is probably what the media was trying to do.
Posted by Kazu Tabu at 9:10 AM No comments:

A color study for my next project, which has underwater theme. Trying to achieve soft, illustrative style in underwater green-blue environment. I'm not sure how it's going anymore, so I decided to just post it and see how I feel about it a few days later.
Posted by Kazu Tabu at 9:24 AM No comments:

Yu will be in this artshow this Saturday, July 16th, in downtown LA.
If any of you live in or happen to be in LA, please come visit. I helped her install her artworks, and I promise it's going to be an awesome one.
when: July 16th. Sat. 4pm-2am.
where:613 Imperial St. Downtown Los Angeles.
http://www.createfixate.com/events/next-event/
Hope Carmageddon won't be as bad as expected.
Posted by Kazu Tabu at 1:42 PM No comments: First figure drawing in a while. It was okay. not the greatest.
Posted by Kazu Tabu at 1:24 PM No comments: 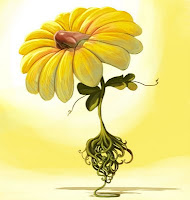 The older I get, the more difficult it has gotten for me to let go with inconsistency. When somebody says something, it bugs me when it doesn't get done the way he says originally. When I do or say something, I really want to do it consistently. It's getting more apparent as I get older, it seems.
However, I have pretty inconsistent style for my drawing and painting. Don't you think?
Posted by Kazu Tabu at 9:36 AM No comments: 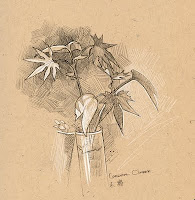 漠然とした話だけれど、広告業界に身を置いて、メディアとか、流行とか、経済とかをみていて、どうしてこんなにも人は（自分も含め）流されやすく、とくにお金の動きを中心に回ったり、回されたりしなくちゃならないのだろうと、思ってしまう時がある。この資本至上主義社会はなにも今に始まった事では全然ないし、こうやって感じる事も真新しい考えでもなんでもないのだけど、ふと世間の注目が移っていくのをみていて、その注目の的が実際のところどの程度変わったというのか、と思ってしまう。その流れの脇にはお金があり、流行があり、貪欲な気持ちがあったりするわけだけれど、実際のものが大した変化を遂げなくても物事の見え方はそれを取り巻く環境でこうも変わっていくものか、という具合に変わっていく。そんな流れを少しでも自分に向けていくために、企業は莫大なお金と人（本当に莫大なお金）をつぎ込んで、そうやって、ものごとの本質はどんどん見えにくくなっていく。
Posted by Kazu Tabu at 5:06 AM No comments: 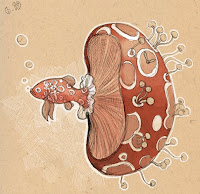 最近、ひさびさにパルプフィクションを観て、ファイブダラーシェイクのシーンをみて、無性にシェイクが飲みたくなったので、ウチから歩いて３分のところにある２４時間営業のダイナーにいったら、そこのシェイクが＄６だった。さんざん迷ってモカシェイクを買い、うちの裏庭のオレンジの木の陰にビーチチェアーを置いて、夏らしい演出をほどこして飲むと、これが何とも言えないほどファッキングットなシェイクだった。これはこの夏ハマるかもしれない。
ちなみにこのFred62という５０sダイナー、ちょくちょく映画の撮影に使われているようなところで、なかなかマッチョでアメリカンな雰囲気を楽しめます。
Posted by Kazu Tabu at 4:01 AM No comments: 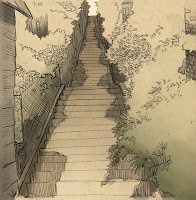 Yu took me to this mysterious staircase in our neighborhood.
Overgrown shrubberies were coming out from both sides, and 3 scary dogs kept barking behind the fence. It was very steep, very long stairs, and we could only see small light at the end.
The stairs only connect two small suburb streets, but it was very exciting to go up the stairs to find out where it was taking us to. With all the technologies and everything, it's getting harder and harder to encounter such unknowns.
Posted by Kazu Tabu at 10:37 AM No comments: 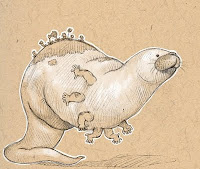 Finally it's getting hot over here. I want to go camping, swimming, or just laying on the beach.
I went to the Hollywood Bowl to see Cibo matto and YMO last weekend. Everything was really awesome (really happy to see Ryuichi Sakamoto, and Cornelius on the guitar. I enjoyed Buffalo Daughter and Towa Tei's DJ for intervals,) but I have to say I was most impressed by the secret guest Yoko Ono.
She is so crazy that I almost forgot about everything else I saw that night. I had heard how crazy she'd been doing and had seen some clips of her singing, but, oh man, she was much much more than I expected. She's a crazy son of a bitch who can't sing but definitely got something else (I can't really explain what). Can't believe she's 78 years old.
Posted by Kazu Tabu at 10:03 AM No comments:

Kazu Tabu
I am an illustrator. kazutabu.com